Copyrights Vs. GCC Vs. Public

One of the hallmarks of the Internet, in the United States, has been that since the copyright laws were undefined that anything could be put up. Since 1999, this has been gradually changing and in 2013 many of these "undefined" standards were defined. In the process of defining what the copyright laws were on the Internet, the United States also gave validity to the three basic forms of copyright statuses that a graphics (an image computer generated, scanned, or loaded into a computer via a photographic device), music, and the written word.

The concern with these new standards is that they help catch up the United States with the rest of the world. It also sets a standard of what the new codes of conduct on the Internet by one of the entities in the world that loves law suits (all individuals within the United States). Individuals in the words of the US Law applies to any US Citizen, US National, Corporation, or individual that contacts an entity in the US to represent them. Each of these have had more lawsuits within the US boarders than anywhere in the world each year for almost every year in the 20th century. This fact is to show the scope and importance in knowing what your rights are on the Internet.

As a respected lawyer of Music Eternal stated, "Ignorance is no excuse in the eyes of the law." This information is to empower you so that you will be able to protect yourself in the world of copyrights. 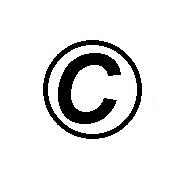 We all know the symbol of the "C" in the circle (Copyright), the "TM" (Trademark) and the "R' in the circle (Registered Trademark). There is also the ℗ which stands as one of the symbols that can also be used in copyright in music and/or other audio clips. In the past the ©, ℗, and the ® stood for a copyright that was registered, and the ™, (c), (r), (p) stood for unregistered. The key difference at the time was that unregistered was where it was not registered with the respective government, but the originator claimed ownership. This is what is called an informal copyright and could be used in court. In the past, if there was no copyright then it was viewed as public domain where no one claimed ownership. In this part we will define what these base copyrights are since the changes that have happened as of 2013.

OOn the Internet, a person could post anything they wanted in terms of text, graphics, and music. As long as there was no claim of ownership then the person was in the clear. This was the case as there was no true definitions to what the rights of ownership were on the Internet. This has now changed and applies to anything put on the Internet regardless if it is an official website, blog, social media (Facebook, Twitter, YouTube, etc), any file sharing site, peer-2-peer networks, or any medium that holds files (including sites like Flickr, Digg, Soundcloud, etc.). The laws are set up where these sites are at the risk of their uses, but the users are bound by the Terms Of Service, Governing Pages, or other pages that define what the user's rights are.