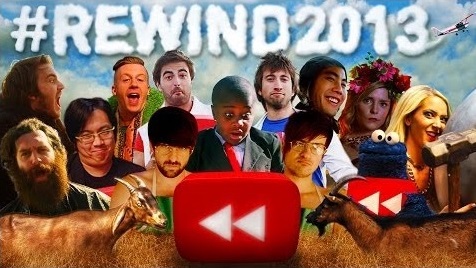 The YouTube Rewind: What Does 2013 Say? is a perfect tribute to all the major players on YouTube. Many of these are Video Social Media phenoms that have gained an almost cult status on YouTube. This ranges from traditional comedians and actors like Jimmy Kimmel and Jimmy Fallon to YouTube only personalities like PewDiePie. Many of these YouTube only personalities are now making a good living as vloggers on the Video Social Media giant.

Just like the Vloggers, there have been a number of musical artists that have found a way to embrace and market their YouTube videos to make a profound impact in the Music World. This has made many of them focus more on YouTube as their main outlets and less the many other mediums of the Internet. Some ideal examples are Psy (Gangnam Style and Gentleman) and Ylvis (What Does The Fox Say). With each of these that have exploded on YouTube, it started on the video medium then expanded to other mediums.

Psy started out with the Korean label he is on doing a unique approach in their marketing that made both the main YouTube and the Japanese YouTube hubs explode with traffic. Their professional video and the countless parodies that surfaced throughout YouTube gained millions and billions of views. In just two years, Psy has broken most of the molds of K-Pop and has become a bit of a legend in the Oceania music landscape.

Ylvis brought a more simple feel to their videos that was almost themed off of the vloggers of YouTube that made it an instant hit. The mascot and masquerade styled costumes and the sounds that are almost a tribute to PewDiePie. This created a bridge to hundreds of millions of viewers that started out watching the vloggers and ended with watching the music videos to Ylvis.

YouTube Rewind: What Does 2013 Say? is a fitting tribute to the building blocks to their Video Social World and can be a good tool as to how one social medium can have a massive impact to anyone - artist, vlogger, or just someone that likes to make low budget movies. Find your medium or be part of a bigger collective that can help you reach for the stars. Everything takes work, support, and sometimes a bit of luck. Before it all began for Psy, Ylvis, PewDiePie, or any of the others; they all had to look in the mirror and realize: It All Begins With Me. They were the beginning, the rest of it is built on their talents, personalities, and inspiration.

For all the musical artists in the world and those that have a dream, look at the video and remember one thing. Each of these YouTube greats started it all as someone with a dream. They found their way to break out in the Virtual Age in the foundation that YouTube created. Find yours and never give up. There are many avenues out there and there are many that will give support when it is needed. Music Eternal was created with this inspiration in mind, to help the artists break out and be visible to the world.